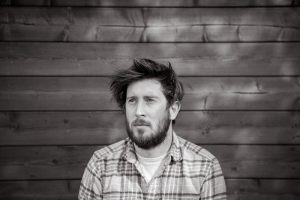 British photographer Simon Bray, 31, created the Loved & Lost Project in 2013, inspired by the loss of his father four years earlier.  Simon’s unique website offers people who have lost a loved one to choose a favorite photo of themselves with that person, and to go back to the location of the photograph and have Simon replicate the image.

Old emotions are relived and new ones are discovered as Simon photographs participants in the same location, but this time alone. In-depth interviews accompany each person’s story where the participant gets to share their story of loss, honor their lost loved one, and remember the most special aspects of their connection. As Simon sums it up: ‘This project provides a platform, allowing others to acknowledge their loss, to celebrate the person they love, and to show that the loss they’ve experienced does not have control over who they are.’

JFM: What kind of feedback have you had from participants on how it has helped them?
The most common response that I get from participants is how positive an experience it is, some going as far to say that taking part in the project is one of the best things they’ve ever done. In turn, once the stories goes public, the participants get their own feedback from family and friends, who may be appreciating the depth and emotions of the events for the first time, so it creates these new strands of communication and facilitates people talking about loss and grief, which is why I started the project in the first place.

JFM: Describe how it celebrates the lost loved one?
It gives people an opportunity to tell their story and the stories of their loved ones. We all have a story, and whether we realize it or not, we’re all trying to find a way to share that story with those around us. As a society, we’re not especially good at listening to one another anymore, so this is a chance for an individual to speak, and for me and the audience to listen. When someone passes away, you’ll often get asked how you are, which is a good start. But actually, what’s burning inside you is the chance to tell everyone how amazing the person you’ve lost really was. I’ve heard someone say that grief is love but with nowhere to go, so I’m trying to give people somewhere for it to be shared, even if the person it’s intended for won’t ever get to hear it.

JFM: Is it hard to get people to do it?
Not at all. In fact, I’ve had to turn people away, which is a real shame, but the project is run by just me and I’ve only got a certain amount of capacity to work on new stories. That may change in the future though.

JFM: Why do you think people participate? What does it mean to them?
It’s a chance to tell your story. For those who’ve lost someone close to them, all you really want is to speak with them, but without that, speaking about them is a close as we can get. It’s an outlet really, a means to let the world know what you’ve been through and break down those barriers of grief. In that sense, it’s designed as a cathartic and restorative process that I hope allows participants to open up in ways that they haven’t done so before. I’m not a counsellor, and there’s no great secret, but there’s a lot of power in asking someone about the things that mean the most to them. But when do we ever do that?

JFM: Do most people contact you?
Yes, that’s the only way that people can take part in the project. I didn’t want to be putting people on the spot and placing any expectation on them, so if people are interested, they need to take the step of putting themselves forward, which they can do through the website: www.lovedandlostproject.co.uk

JFM: You do in depth interviews. Is it easy to get people to open up? Do you do the interviews at the site of the photo?
Yes, the interviews take place just after we’ve taken the photographs, usually in a cafe or someone’s home nearby. People do tend to open up, which they are comfortable with partly because they put themselves forward to take part. I’ll always take time to speak with participants on the phone before we meet, to give them a chance to ask questions, but also so they know my story as well (which is up on the site). That shared experience of loss immediately brings a connection and builds that trust, so that on the day, when we talk, which is usually for around 45 minutes, we’re not starting from nothing. We’ve already had some time to get to know each other and appreciate that we’ll understand each other when we talk about the concepts and experiences of loss.

JFM: How do you deal with participants’ emotions and direct them as a photographer?
I leave that totally up to the participant. Some people don’t feel like smiling, others do. It might feel peculiar to show people smiling, but as I said, it’s a positive occasion, to return somewhere, remember happy memories and reconnect with the place that holds those memories is enjoyable, even if it is lined with sadness.

JFM: Are there many tears?
Occasionally, from the guys and the girls. I want people to feel comfortable to express whatever’s inside. There’s this taboo that it’s bad to be sad, but sometimes, we just need to experience that sadness and give it an outlet.

JFM: What do you think people’s biggest take away is after they’ve participated?
That’s hard for me to say really. I don’t want to put words into people’s mouths, but when I took part in the project myself, I found great relief and comfort in being able to express all these feelings and stories about my dad that I didn’t get to share on a regular basis. The project isn’t about the public story, it’s about the experience of being able to remember and share.

JFM: Why did you chose not to mention ages or how the person died?
The project could so easily have become this fact file of people who aren’t with us anymore, names, ages, dates, places, how they died, and as much as those things are sometimes relatable for certain readers, it goes too far in distinguishing one experience from another. Loss doesn’t happen in an ordered and factual way, so I didn’t want to represent it as such.

JFM: Has doing the project helped you with your grief? Connecting with others who have loved and lost?
I’ve always said that the project is as much for me as it is for those taking part. The chance to make something positive from the loss of my dad was not only the starting point but the reason I continue. That’s not to say it isn’t exhausting at times, but it allows me to talk about my experiences and learn from others, which is a huge privilege.

JFM: Where do you go from here? Book or exhibitions? Any plans to do it in the US?
There are plans for an exhibition in Manchester, UK, next year and I’m about to begin work on a commission for a museum. I’m exploring options for making a book, although that would feel like the end of the project and I’m not sure if we’re there yet, I need to take some time to decide! No plans for the US yet. As I said, it’s just me and I’ve got a new baby girl who I couldn’t bear to be away from at the moment, but I’ll never say never! 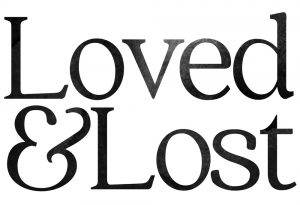